The blackboards and panels will allow you to present different concepts for the whole class. The panels have large, transparent pockets so you can include your favorite Akros game chips or the cards you make with your students in class.

Magnetic boards will allow you to play with magnetic cards or magnets, and with calendars you will be able to work with concepts such as time: seasons, months of the year, weeks, days, hours and even atmospheric weather. 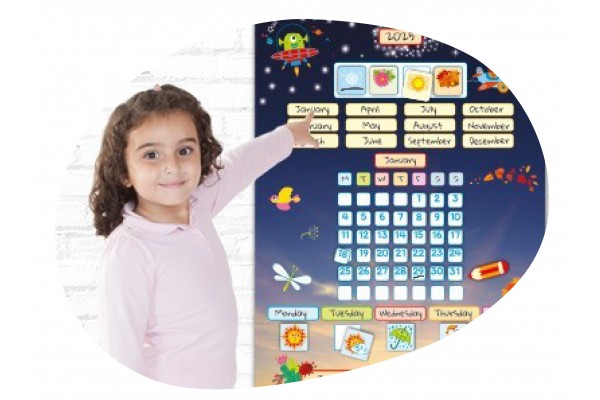 30120
A calendar with a very intuitive structure that helps young children to understand how time is organized. Its vertical deductive structure allows children to move from global to individual concepts and helps them to form a clear and schematic image of the composition of time over a year.  It is based on the year and its seasons, travelling through months...
View

39010
1 Reviews
A board for planning everyday activities at both home and school, associating them with the hours of the day in both the AM/PM and 24-hour-clock versions.
View

39000
A weekly calendar to introduce very young children to the concept of time, distinguishing between yesterday, today and tomorrow. You can position the days of the week and the month. It includes simple three-step time sequences and pictures of the weather.
View

40105
A display panel made from very hard-wearing plasticized canvas with transparent bands. A very useful piece of equipment for daily teaching tasks.
View

30959
Roll-up erasable metallic board. Practical and light. It allows writing and/or playing with magnetic cards. It includes magnets in order to fix the board on the wall.
View

30155
A big metallic board for working in the classroom on the days of the week, the months, the year, the seasons, the time and the different activities that take place during class time.
View

Reinforcing learning with whiteboards and visuals

In classroom teaching, the use of language by the educator is insufficient for children, especially the youngest ones, to assimilate the lessons taught. To make teaching take root, classes can be reinforced with visual and intuitive resources, such as the school material provided by Akros in the form of panels, plannigs, displays and highly configurable magnetic or canvas boards. These media, equipped with pieces and cards with an attractive presentation, make it possible to explain concepts (such as time management, or the seasons of the year) that could be less accessible to children through other channels.

The whiteboard is the instrument through which the teacher can specify data, undo ambiguities, or outline complex concepts, among other possibilities. Technological modernizations and different changes in educational paradigms have never diminished the importance of resources such as blackboards in the classroom. Regardless of the material, from the classic waxboard to a modern electronic blackboard and even a blackboard in a developing country, slate has for centuries proved to be an irreplaceable resource for reinforcing and transmitting education.

Importance of the visual channel in learning

In recent years, in pedagogy, emphasis has been placed on the need to stimulate as many sensory channels as possible in education. Sight is one of the main channels through which we can learn and, in some ways, visual learning leaves its mark on the older child than that which makes use of other channels. The use of visual material favours learning by facilitating cognitive processes, since image memory is much more persistent than acoustic stimuli. It should also be emphasized that for certain children, such as deaf, dyslexic, or children with ASD, visual learning is more accessible.

The importance of visual learning is a particularly debated topic not only in the field of pedagogy, but also in the area of cognitive psychology. The sense of sight is our main source of information about the surrounding world. Much of the cerebral cortex is involved in the vision of objects (shape, color) and visual control of movement. Vision is a fundamental aspect in both the biological and socio-cultural context.

In recent years, theories of intelligence have been put into practice that have put the pre-eminence of verbal and linguistic intelligence into crisis. Howard Gardner, for example, in his theory of Multiple Intelligences, underlines the fundamental role of what he calls spatial-looking intelligence.

Save products on your wishlist to buy them later or share with your friends.